What to do in fire situation | Office12 Resident Guides

What to do in case of fire in the workplace

18 January 2019
Fires are especially dangerous if people don’t know what to do.

Prevention is better than the cure.

Whilst a simple concept, the fire triangle is a scientific principle that is important for all people to be aware of. Understanding how fires sustain themselves is essential background information in situations where you may have to use fire safety equipment.

We will be summarising the fire triangle, and the lesser known fire tetrahedron, in order to give you vital insight into what maintains a fire.

What is the Fire Triangle? A source of heat is required in order for ignition to occur. Different materials have different ‘flash points’ e.g. the lowest temperature at which they ignite. Unfortunately, combustion reactions also produce heat as they burn, further increasing the temperature of the fuel. For some types of fire, the heat can be cooled with the application of water.

A fire cannot begin if there is no material to burn. Homes and businesses are full of flammable materials, such as paper, oil, wood and fabrics. Any of these can serve as a fuel for a fire. Some materials burn more easily than others. Fuels are probably the most difficult ‘side’ of the fire triangle to remove, so it’s wise to store them appropriately to prevent them becoming a fire hazard.

To sustain the combustion reaction, oxygen (or an oxidising agent) is needed, as it reacts with the burning fuel to release heat and CO2. Earth’s atmosphere consists of 21% oxygen, so there is plenty available to trigger a fire if the other two components are present. Fire blankets and certain fire extinguishers remove the oxygen ‘side’ of the triangle by removing it or displacing it, causing suffocation and thereby ceasing the combustion reaction.

What is the Fire Tetrahedron?

The fire tetrahedron is a slightly more complex model to describe the components needed to ignite and sustain a fire. It is a four-sided geometric representation of the four factors necessary for fire: 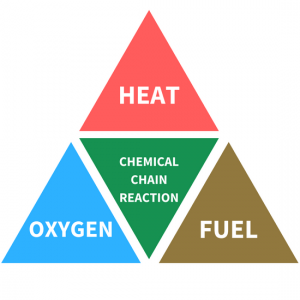 The fire tetrahedron includes the three components covered in the fire triangle, with the addition of a chemical chain reaction.
This model is simply adding another dimension onto the traditional fire triangle model by treating the chemical reaction as its own separate component. Some fire extinguishers work by applying extinguishing agents to the fire to inhibit the chemical reaction on a molecular level.

Steps to take if there’s a fire in the workplace.

It is critical for the residents to make sure that they are aware of the fire safety plans and procedures in place, along with the location of fire extinguishers and escape routes.  They should familiarise themselves with the below tips about what to do if ever there’s a fire in the workplace.

Anyone discovering a fire should raise the alarm immediately, regardless as to how small the outbreak is or how innocuous it appears to be. Fires can develop very quickly and every second counts. 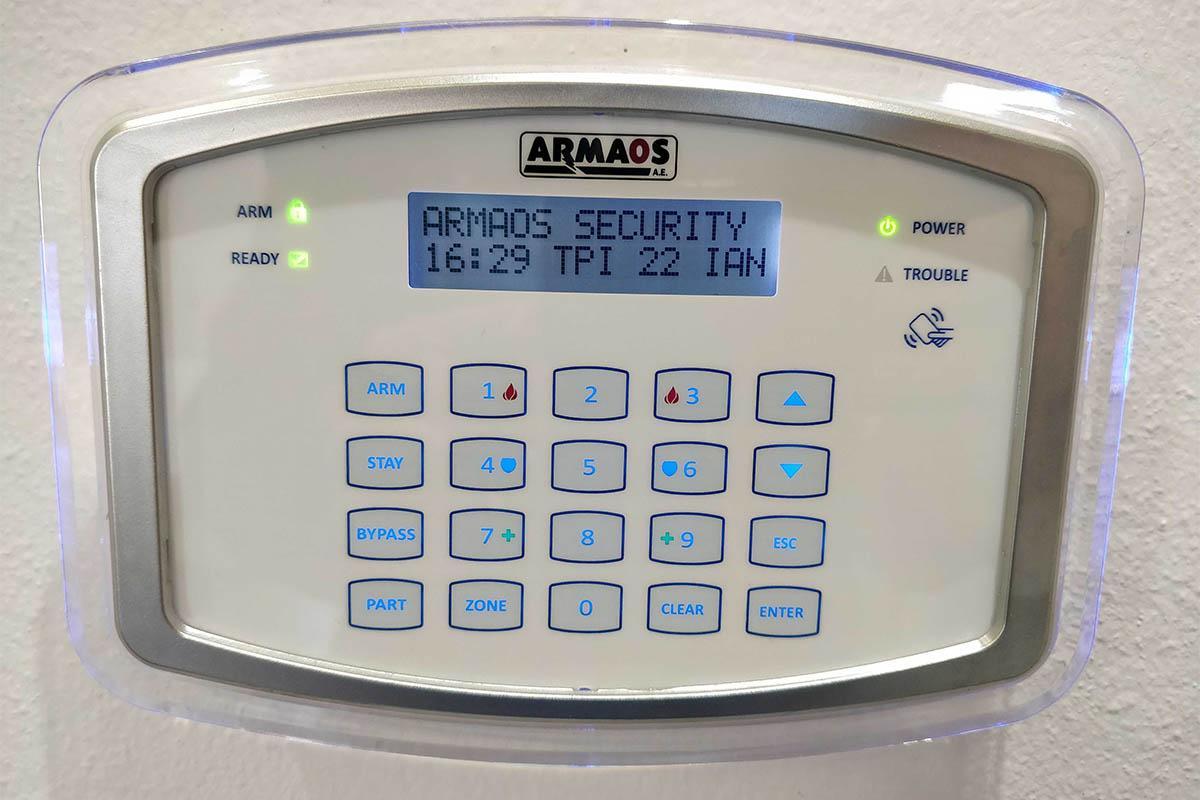 The Fire & Rescue Service should be called (at 199), with the name, address and full postcode of the property given clearly, along with any helpful information such as the fire type and location.

If the alarm has sounded automatically, assigned office fire marshals should investigate the alarm condition as everyone else evacuates the building. If it is a genuine fire condition, and if the fire is small and manageable (about the size of a waste paper bin on fire), and the appropriate type of fire extinguisher is available, then somebody may attempt to extinguish the fire, but only if they have been trained to do so.You can see below “How to Use a Portable Fire Extinguisher” for instructions.

They should make sure that their escape route is never compromised by the fire, as well as ensuring they are confident that they understand the fire type and adjacent risks. Similarly, they should retreat if, despite their best efforts, the fire continues to grow. Fire marshals will “sweep” their designated areas of the building to ensure that everyone is out safely.

Evacuation should be prompt and calm, with everyone making their way to exit. 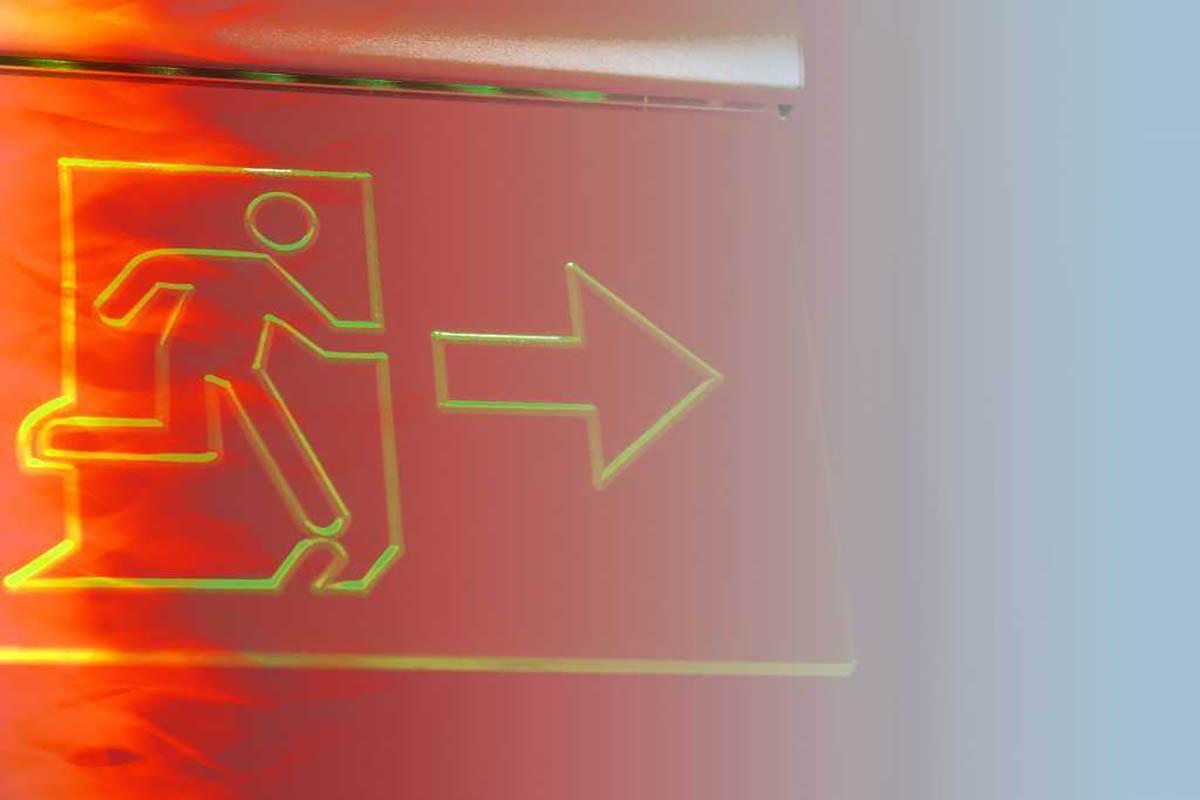 You should shut own any hazardous machinery or processes in line with the fire evacuation procedure for the site.

Do not stop to collect any personal belongings.Never use lifts in the event of a fire – this is because the lift could stop working, trapping you inside, or the doors could open on the afflicted level and expose the occupants to flames, heat and toxic gases.

Head directly to the nearest emergency fire exit. Put your hand against any doors you go through to check that the fire is not on the other side. The last person out should try to close doors behind them to prevent the fire spreading through the building’s “fire compartments” and also to reduce the level of oxygen available in any room to feed the fire.

If the escape route is affected by smoke, drop down onto the ground and crawl, as the available air will be cleaner closer to the ground.

Once you have exited the building, a headcount (or nominal roll call) should be performed, making sure that any visitors are accounted for.

You should not re-enter the building until told to do so by an attending Fire Officer.

If You Become Trapped Inside

Try and get to a room with a window.
If you’re on the first floor, open a window and lower yourself to arm’s length, then drop to the floor.
Never jump from a window and make sure to first throw down some soft materials onto the ground outside.
If you’re too high up to attempt this, then use the window to call for help and also call 199.
Block the gaps under doors with materials such as clothing, bedding, towels etc. to prevent smoke from entering.

If your clothes ever catch fire, don’t run around as this will fan the flames; instead, remember: Stop immediately, drop to the ground and roll to smother the flames.

How to Use a Portable Fire Extinguisher

Watch this video created by the Fire Equipment Manufacturers’ Association to learn how to assess a potential fire situation and use a portable fire extinguisher in the event of a fire emergency.

How to use the espresso machine

How to use the printer

In Office12 premises you can use Samsung Xpress SL-M2875 Laser Multifunction Printer - User’s guide provides information for your basic understanding of the machine as well as detailed steps to explain machine usage.
Read more

When working in a shared office space, you can create a friendly environment by being conscientious of the other workers. If you follow some basic workplace etiquette rules, you are well on your way to commiting in a friendly, efficient and courteous shared space.
Read more
Go back